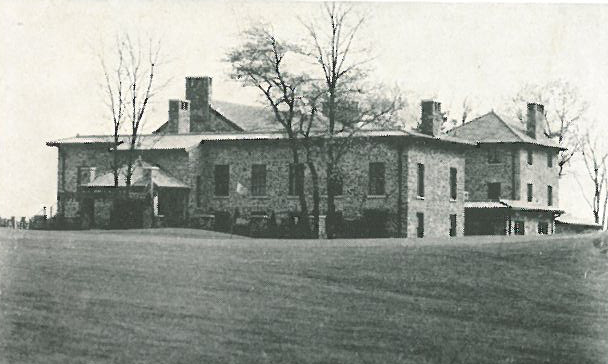 In 1885, Mr. Grier Hersh, a banker and prominent businessman, laid York's first known golf course at his estate known as "Springdale". It was a nine-hole course, which measured only 2,281 yards with a par of 34. He often invited friends to join him for a round of golf. One of his friends, a Mr. A. B. Farquhar wrote in his autobiography "The First Million Is the Hardest" the following:"I took the Colonel (Keitt) over to a neighbor, Grier Hersh and we talked over things connected with the war (Civil War), and Mr. Hersh took usout to explain the new game of golf, a course for which he had just started. It was the first golf course started in York and the first time it had come to my attention."

"The golf course was in a beautiful field in the rear of Mr. Hersh's house, with nine holes and various bunkers erected. When I first saw the game I regarded the idea of rational men leaving their business and walking over a field to hit a ball with a stick as being quite absurd but Mr. Hersh invited me to try a round with him. Within ten minutes after we commenced I was infatuated with it, and have loved it ever since, and would recommend it to everyone who has the opportunity to play as the best possible exercise. Your troubles all vanish and you think of nothing else. I used to leave my office and drive to his golf course nearly every afternoon to play a round, and now I have a golf course on my place."

It was from this invitation of Mr. Hersh's to play a round of golf that eventually he and Mr. Farquhar together purchased 67 acres and 99 perches of land in 1890. Prowell, History of York County, states in reference to Mr. Hersh, "He was so zealous in the organization and success of the York Country Club, of which he became president, that he built the clubhouse and leased it, with the grounds, to the club."

On March 6, 1915, Mr. Farquhar purchased Mr. Hersh's interest and continued to rent the property to the York Country Club. He had promised his wife that as long as they occupied their residence, "Edgecomb" on the south side of Country Club Road, they would look out upon either a golf course or an open field. This would explain the "and now I have a golf course on my place," in Mr. Farquhar's autobiography.

The nine-hole course was probably first opened on July 1, 1900. The course was very picturesque because of the trees at all of the holes. Although the course was rather short, 5,878 yards, it was also tricky for it was narrow with many out-of-bounds. Players did not score any better than when they played longer courses. This annoyed many from time to time who felt they should score better and rarely did.

Golf at York Country Club became very popular, the membership had grown to 241 members and 198 of those members played golf. There were two men's golf teams, the A team (who were very serious about their game) and the B team (who considered the game of golf fun). In the early 1920's a ladies' team was established and played regularly scheduled matches at local clubs and at the Elkridge Hunt Club of Baltimore. The first golf professional hired was Emmett French, who became well known nationally for his exceptional teaching ability. Under his tutelage, Mary Stair became the first York woman to be champion of Central Pennsylvania Women's Golf Association. This organization held its first tournament at the York Country Club in 1922 and the budget that was borne by the club "was not to exceed $25.00." (This was noted as a motion that was made, second, and approved by the President of the club).

Another Pro was Tug Tyler who invented, produced and sold a wooden headed T-shaped putter with a brass plate on the face. This was the forerunner of the present T-headed putters.

Although many members enjoyed playing golf, there were also many other activities held at the club. Dancing was very popular and Thursday evenings there was a dinner and social. There was croquet, billiards, horseback riding and tennis. The club not only sponsored a baseball team, but also had a baseball diamond for the team. Every summer on Sunday afternoons the York Country Club team played teams from Pennsylvania, Maryland and Delaware.

At a board of directors meeting on January 13, 1923, there was a proposal made by C. Elmer Smith on the possibility of looking for a location to build a new eighteen-hole course and a modern clubhouse. It was not until the following year on January 12, 1924 that the board of directors formed a committee to investigate locations and make recommendations for a new country club. There were many sites considered, but they narrowed them down to two locations-one some distance from York and the other one at the present site. Due to the proximity of the one, it was decided that "Crows Nest" would be the ideal site. In May of 1926, the committee chose Donald Ross and Associates to design the golf course. Mr. Ross tramped over the terrain and plotted the course. The course combined natural hazards of the terrain with artificial lakes and bunkers for a total of 6,550 yards for play with a par 72.

The first foursome to play the new eighteen-hole course in August 1927 consisted of C. Elmer Smith, S. Fahs Smith, Carey Etnier, and Edward Connery, the pro. Nothing has been documented about how well they played or what they thought. However, over the years there have been many "golf" stories, a favorite is noted in "Country Club of York History 1899-1975".

"One day Spencer Warheim teed off at No. 1, sliced his ball into the No. 10 fairway, sliced it again into the No. 18 fairway, then shot it all the way over into the No. 1 green and sank his putt at 4 par, never having been on the No. 1 fairway!"

The new clubhouse opened on September 22, 1928. One of the interesting things about the clubhouse is that while the grading was going on for the golf course, they found a deposit of quartzite. After consulting with the architects, it was agreed that this stone would be quarried and used for the building of the new clubhouse. Originally, the clubhouse was built to accommodate 250 members and their families. By 1961, the membership was well over 500, and in 1962, a major renovation began and brought the clubhouse to its present size. In 1960, the first watering system was installed on part of the course, thought to be holes number two and seven. The use of the golf course was constantly increasing. In 1961 Mr. David Gordon, President of the American Society of Golf Course Architects, reported that making minor alterations to the course would improve and make the golf course more attractive and challenging. Most of this had to do with increasing the size of the tees and relocating a few sand bunkers. Other than that, most of the other improvements were tree removal and tree pruning and the recommendation for a water system for the fairways.

The golf course is nearly as Donald Ross envisioned it. Some sand bunkers were removed or others added, many ornamental trees were planted and cart paths were extended. The forests kept growing toward the tees, fairways and greens as the way nature intended it to be. All of the greens remain, with the exception of number eight green. This was replaced because of the surrounding forest and it's increasing shade. There is now a long-range plan to restore the course to the original intent of Donald Ross. The plan will be incorporated into the clubs by-laws to insure that the course will remain as it was intended.

On July 25th, 1999, 156 of the best junior players in the world came to test their skills in competition with the golf course and each other. The 52nd United States Junior Amateur Championship was the highlight of the Country Club of York's 100 year old celebration.